"Initially intended as a sidearm for artillery soldiers, the Stechkin automatic pistol gradually phased out of active service during the 1970s.  Regardless, the APS is still being used today by the Russian Interior Ministry and the FSB special forces due to its firepower and efficiency.  It can operate in fully automatic mode."

The APS is a tier 1 handgun.

The APS is a fully-automatic pistol which is extremely easy to obtain, costing minimal credits to purchase and repair, and being available at level 0. For this reason, it is highly popular among novice players. As a fully-automatic pistol, it is a very reliable weapon and it is easy to aim at close range. However, the APS falls short at longer distances, where semi-automatic pistols, revolvers, and high-calibre pistols are more effective.

Ever since the APS was given its own Weapon Customization, its reload speed has been substantially quickened, making the weapon much more desirable for many players.

The APS has a rather large magazine capacity of 20 rounds. This isn't as good as most other fully-automatic pistols (aside from the Enforcer (Beretta FA)). However, this is much better than most other pistols from the lower Sets.

Compared to other low-caliber pistols, the APS has moderate accuracy, moderate mobility, low damage-per-shot, and low penetration. Despite this, its most distinctive feature is that it is the only credits-purchasable weapon that can select the fully-automatic firing mode.

Achieving 7 RageKills with the APS will unlock the W-Task. The W-Task adds a PBS-S suppressor, renames the APS to PBS and unlocks the Infrequent BDGUR (Big Digital Urban) camo. The W-Task also grants the player access to the Customization. See APS/Customization for more information. 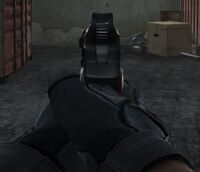 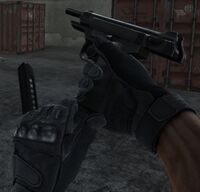 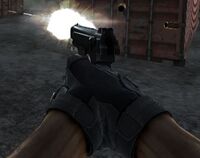 PBS icon.
Add a photo to this gallery

Retrieved from "https://contractwars.fandom.com/wiki/APS?oldid=26888"
Community content is available under CC-BY-SA unless otherwise noted.