The AS VAL MOD.3 Spec is the unique assault rifle of the Assault Skill-tree.

The AS VAL MOD.3 Spec is a fictional second generation heavy modification of its cousin, the AS VAL Kobra, which includes a shortened integrated silencer, a custom all-barrel rail, and a forward grip.

The AS VAL MOD.3 Spec is one of the best weapons in the game. Regarding its base performance, and taking into account its built-in silencer, it is perhaps tied with the ACR-C as the best rapid-fire mid-ranged assault rifle in the game; like the ACR-C, its stats are an improvement upon the M4A1 Custom assault rifle. The AS VAL MOD.3 Spec also comes equipped by default with the Aimpoint COMPM4 collimator and the AN-PEQ 15 tactical device, both of which are some of the best possible weapon modifications available.

Furthermore, the AS VAL MOD.3 Spec costs SkillPoints to be unlocked and is not a permanent addition to your inventory; if you reset your Skills, then you will lose your AS VAL MOD.3 Spec and will need to repurchase it.

Notably, the AS VAL MOD.3 Spec only features 6 total magazines rather than 7 (unlike the M4A1 Custom and similar weapons). This is not really noticeable until the player has achieved a significant KillStreak, at which point the player will notice that they are missing a potential entire magazine which other weapons would feature.

Overall, the AS VAL MOD.3 Spec can be described as a great intermediate weapon. The AS VAL MOD.3 Spec is essentially the best assault rifle in the game at the default level, due to the excellent weapon modifications which are equipped by default. With a price of only slightly less than 1000 GP and half-a-million CR, which sounds like a lot but is actually much cheaper than it would take to improve the performances of other high-tier weapons through Unbreaking, W-Tasking, and Customizing, the AS VAL MOD.3 Spec offers performance which can rival some of the best weapons in the game.

Regarding its strengths, the ACR-C doesn't require SP, has a large magazine size of 40 rounds (compared to the standard 30 rounds of the AS VAL MOD.3 Spec), and can equip various scopes. Furthermore, the ACR-C features much, much lower recoil, which makes it better for mid to long-range combat.

With the ACOG assault scope equipped on the ACR-C instead of the Aimpoint COMPM4 collimator, the stats of the ACR-C are nearly identical, except that the ACR-C now has access to a reasonably clear x2 optical zoom sight, which is perfect for tackling opponents at mid-range (which is the optimal range of both weapons). The AS VAL MOD.3 Spec cannot equip this scope, nor can it equip the Elcan SpecterOS or Leupold Mark 4 CQ/T scopes, both of which have roughly x4 optical zoom and are more suitable for long-range combat.

In order to acquire all of these weapon modifications for the ACR-C, the player will need to spend around 5000 GP, which is around five times more than is required to purchase the AS VAL MOD.3 Spec with its default weapon modifications. However, the ACR-C doesn't consume SP and is a permanent addition to the inventory, whereas the AS VAL MOD.3 Spec can be removed from the inventory if Skills are reset.

The AS VAL MOD.3 Spec is acquired as an unbreakable weapon immediately upon purchase, similarly to weapons which are solely obtained with Goldpoints.

The AS VAL MOD.3 is one of five weapons in the game with an integrated, undetachable silencer. The other four weapons are the H&K MP5SD6, AS VAL Kobra, VSS Vintorez, and H&K MP5SD Spec. Note that several other weapons also feature integrated silencers, but they seem to be detachable. This includes the PMM-12, Glock 17 DEVGRU, DT SRS Mk.2, FN P90 DEVGRU, and Vikhlop.

Reload
Add a photo to this gallery 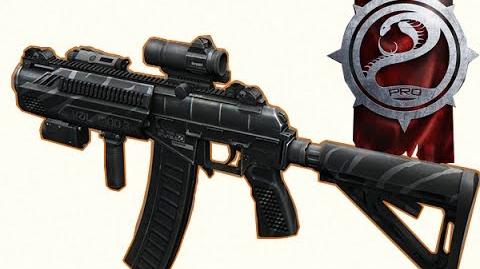 AS VAL Mod 3 - Prokill - 1337 Mattiareza
Add a photo to this gallery
Retrieved from "https://contractwars.fandom.com/wiki/AS_VAL_MOD.3_Spec?oldid=27886"
Community content is available under CC-BY-SA unless otherwise noted.