This map is the smallest map in the game, which is why it's recommended to use weapons with short range like SMGs (Ex: Skorpion EVO, Kedr, Bizon-2B, etc),and assault rifles(example: M4A1, SCAR-H, KAC PDW, etc). Bay5 is also one of the most popular maps in the game, as Bay5 games are almost always full, or close to it.

Even though the map is small, the use of sniper rifles can be achieved by either no-scoping, or using non-optic sights (assuming that the weapon is customizable).  If the player is more experienced he can use "no scoping", a way to use sniper rifles in which the player must kill an enemy without using the scope. Generally, no scoping in the game involves stopping all movement, centering the target in the middle of the screen, and then shooting.

The use of shotguns is also very effective in this map, but shotgun users are also the second or third most hated-on users in the game.

When it comes to artillery, mortar is really effective since the space in this map is small, so the player may kill multiple enemies in the process. There are also several locations on the map where players tend to gather, such as the three conjoined containers or the ramp. Sonar is useful to get more points and achieve first place, but it has to be thrown in the centre of the map in order to detect more enemies and gain more points.

Bay5 is, in addition, the ideal map for tasking pistols, or primaries that require headshots or double kills, due to its small size, and the fact that there are several "gathering" spots where groups of players converge on to. 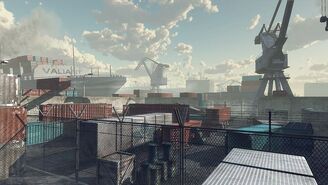 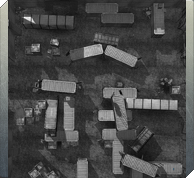 Minimap of Bay5
Community content is available under CC-BY-SA unless otherwise noted.
Advertisement