"Developed at the request of the Russian Ministry of Internal Affairs, the Bizon sub-machine gun is primarily intended for counter-terrorist and law enforcement units that usually need fast and accurate fire at close ranges'. Based on the layout of the AKS-74U carbine, the Bizon features a very large magazine capacity."

The Bizon-2B is a tier 2 submachine gun.

Overall, the Bizon-2B is a very unique SMG. The combination of a large magazine size and high mobility make the Bizon-2B a powerful flanking weapon. The Bizon-2B is also incredibly good at attaining DoubleKills or better kill combos. However, the slow fire-rate of the Bizon-2B lowers its damage-per-second in comparison to other SMGs.

The Bizon-2B can be customized with collimators, optics, silencers, and muzzle-breaks.

The Bizon-2B is the only SMG in the game that has access to a high-power optic, which is the x6 zoom PSO; this optic substantially improves the weapon's accuracy in comparison to reflex and holographic sights. However, by no means is the Bizon-2B capable enough for long-range combat to make the optic distinctively useful. 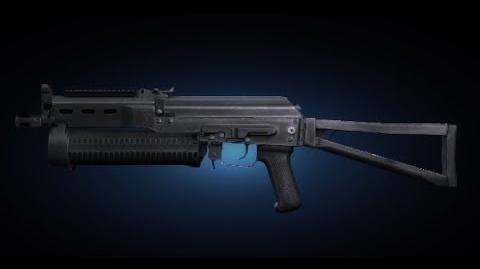 Contract Wars Bizon 2B Shooting Test
Add a photo to this gallery
Retrieved from "https://contractwars.fandom.com/wiki/Bizon-2B?oldid=27875"
Community content is available under CC-BY-SA unless otherwise noted.