Contract Wars, despite being primarily focused on gameplay, has a backstory set in a near-future Russia during civil war.

With the construction of the international main gas-line “Severni Potok” (North stream), on the border of Leningradskaya and Murmanskay regions, across the border of Finland separated by the Finn Gulf, the government of the Russian Federation created a new zone – the Norvinsk sector.

Being the smallest in territory and population for the region, the administrative creation makes Norvinsk a gateway to the European mainland. It has been given status of “Special Economic Zone”, which brings in and secures new, huge foreign investments. Privileged taxation, focused position of business technologies, and attention of government, should make the Norvinsk region attractive for most of foreign organizations. The “Special Economic Zone” (SEZ) becomes an analogy of Skolkovo, not scientifically, but in an economical and financial sense.

Two small, ultra-modern cities become the centers of the Norvinsk sector, each built in a relatively short amount of time. Tarkov City has advanced transport system, boasts railroads, a port and comfortable roads because of its raw-material and resource manufacturing. Norvisk City, named after the region itself, is the financial center of the SEZand these two cities are connected by a speedway bridge that touches parts of the Finn Gulf.

Two years ago, an operative branch part of the huge multinational organization “Terra Group” was the focus of international scandal in Tarkov. Terra Group Labs had illegal activity in the Russian Federation territory, which were coincidentally covered-up by contacts in the local government, with officials from both the agricultural and extraction development industries involved.

Investigators found out a lot of covered deals and corrupt connections of representatives of foreign corporation with local government and owners of big businesses. Aside from criminal proceedings and administrative cases against high employees of “Terra’s Group” branch, special forces of Russian Federation also appear to have interest in their activity, suspecting subsidiaries of the company and it‘s local subcontractor (PLC “Granit-M” and others) of subversive intentions in relation to the strategic interests of Russia. For example, investigation found out that apparently the company “Terra Group Labs”, through shell companies shows huge interest in territories of the region, where Russian Ministry of Defense houses military units and other special military structures. Reasons for their interest in such old military objects is still unknown.

After half a year of political conflicts on international level, employees of security company “Terra Group Labs”, with entering of peacekeepers, provoked an open military conflict between forces of UN and Interior Forces MVD of Russian Federation. This escalated into an armed conflict, with peacekeepers, MVD units and two Private Military Companies(PMC) taking sides.

Apparently, nobody is willing to officially acknowledge this, but everyone understood clearly that PMC “BEAR” (Battle Encounter Assault Regiment) was not created without government’s knowledge (if not by their order), as a possible response to the threat. In a situation where part of the state’s government was occupied by international contingent and it‘s own police and investigation structures lost ability to manage intergenerational activities without agreement from foreign control commissions, the only logical move for the government would be to declare martial law. The enemies in this conflict would be not third world countries, but the major powers, which also are main owners of nuclear and other strategic weapons, so the result of the conflict is easily predictable.

Apparently, in the sum of what been said, today the main active figures in this conflict are PMCs. Hired by “Terra Group” PMC “USEC” (United Security) with passive cover of peacekeepers, “USEC” is preventing official investigation of activity of company’s branch. According to the data of the Russian special forces, with liquidation of evidence and witnesses, operators of this PMC are covering illegal researches, which are still on-going, despite all the laws and prohibitions, which took place at unknown locations.

Operators of PMC “BEAR”, being private contractors of regional public owned organisation, are basically managing military operations in Tarkov city and it‘s local regions. Their main target being search and provision of direct and indirect evidence and facts proving outlaw activity of this foreign company. Also point out that according to the Laws of Russian Federation, any activity on the territory by any non official military objects, structures and units is illegal and outlawed.

Today, almost two years later since the beginning of the conflict we can say that this entire situation is not just spontaneous chain of events. It mostly looks like qualified and long planned military-political provocation. The only question is who and why would anyone provoke Russia to commit such acts. And what is the final target?

As a result, the situation today in the region appears to be very strange, and perhaps even as a stalemate. The peacekeepers “blue helmets” officially stand at key locations of the region, but they rarely appear out of the borders of their bases. The border with Finland and the marine border are still under control of Federal Border Guard service of the Russian Federation and border guards have closed the exits to the West. The Marine border is under regular patrol of Baltic fleet. The only airport built near Norvinsk is in an inactive state and its air corridor is under watch of local anti-air. The land Border is reinforced by Interior Forces, so that means that peacekeepers and employees of Terra Group Labs who are under protection of their PMC (USEC) are cut off from the rest of the world. As there are still UN forces in the region, government cannot deal with this problem by force. This is why the only peaceful method of solution for this crisis situation is the effort of the “BEAR” PMC, with the condition that they will find and present to the official government irrefutable proof of strategic threat from the side of Terra Group Labs.

As with operative situations in region, lately there were moves of the front lines of two PMCs from the region of the Tarkov city deeper into streets. If you take a closer look at the map which have real situations for today, you may notice that PMC “BEAR” is slowly cutting city by its borders. After operations in the port and the bridge, which connects Tarkov and Norvinsk, “BEAR” excluded the ability of evacuation of the employees and physical evidence of “Terra Group Labs”. Also, in the terminals, “BEAR” destroyed several storage units, which were owned by Terra Group, and were ready to be loaded on ship containers with unknown contents. By the opposite side of the city, on highway E-18, “BEAR” was designated to destroy a secret long distance communication center, which was built on the territory of old sawmill. Also, it was discovered that Terra Group Labs bought the reserve station of civilian protection, which belongs to the EMERCOM department.In the latest news, there is still going on battle of two PMCs.

In general, with condition of same temp of advancing, you may expect that in near time, operatives of “BEAR” will block or even take possession of one of the key strategic structures, which figures into the investigation of illegal foreign company activity – former Chemical Refinery №16. Territory of the plant was illegally sold to the Terra Group Labs company in 2009. The nature of works being done there is still unknown. There has been speculation that there was some sort of production; maybe laboratories. This could be a good piece of evidence, that “Terra Group Labs” had participated in illegal activity on the territory of Russian Federation. Because you can destroy papers, digital hard drives with information, kill witnesses, but you cant destroy the refinery entirely, so investigators couldn’t find the purpose of those actions.

With cut off of ways to retreat, they couldn’t evacuate the equipment. In the near future, the situation of the conflict in Norvinsk region may drastically change, and when investigators, jurists and politics start to act, not the militarized operators, it will become completely be stabilized.

List of objectives for USEC to protect and their meaning for them. 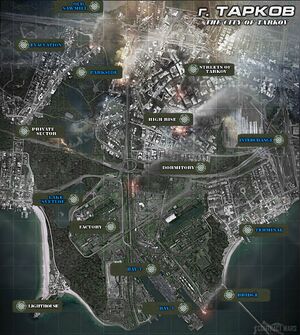 Escape from Tarkov and Hired Ops also play in the Contract Wars Universe (referred to as Russia-2028 universe by the devs). EfT is suspected to be chronologically happening after both HO and CW. The team behind EfT previously worked on CW and HO.

Community content is available under CC-BY-SA unless otherwise noted.
Advertisement