The DSA SA58 Operational Special Weapon, or DSA SA58 for short, is a powerful assault rifle which is optimized for mid to long-range combat.

The DSA SA58 deals the highest damage (per shot) of all assault rifles (excluding DMRs) with at least 30 rounds per magazine. Furthermore, with high accuracy, very low damage fall-off, and a very good effective distance, the DSA SA58 is excellent at mid to long-range combat. The DSA SA58's very fast reload speed also makes it decent for close-range combat as well. However, the DSA SA58 features one drastic downside; a huge amount of recoil exceeding 80 points. As such, the weapon greatly improves at longer ranges if the player uses the semi-automatic firing mode or fires in short bursts. The DSA SA58 also has relatively low reserve ammo when considering its magazine size.

Overall, the DSA SA58 is one of the best assault rifles in the game, though it is not excessively overpowered. This was the case in the past, but the weapon's recoil was increased drastically (by 27 points) in order to make its performance more balanced. The weapon was also stripped of 30 rounds of reserve ammo, apparently lost 3-7 damage points, and lost 6 mobility points.

The W-Task of the weapon is 60 stormkills. You will gain access to a COMP M4 sight. This will replace the "hard to use" iron sights with a more clearer sight. The additional accuracy and lower recoil makes this gun much more effective at range. The mobility reduction has minimal effect on the gun's performance. Completing the W-Task will also grant access to the AN-PEQ-15 tactical device and Osprey silencer at later meta levels, which are highly favored by experienced players due to their ability to maximize the range potential of the rifle while making it suppressed 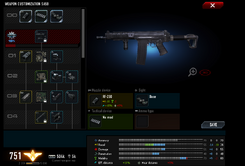 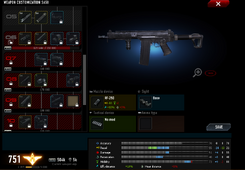 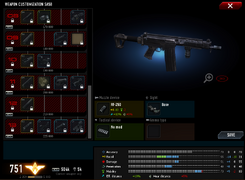 DSA SA58 customisation 3
Add a photo to this gallery

Retrieved from "https://contractwars.fandom.com/wiki/DSA_SA58_Operational_Special_Weapon?oldid=27838"
Community content is available under CC-BY-SA unless otherwise noted.