"A rifle from Desert Tactical Arms that widely spread among many PMCs around the world. This Version was converted to be fired in semi-automatic. It has good mobility and damage when compared to others rifles."

The DT SRS is a premium tier 4 sniper rifle.

The DT SRS is a unique sniper rifle which features statistics that are similar to those of certain designated marksman rifles. By default, it is equipped with the Nightforce NXS 5.5-22x50 scope, which is generally considered to be the best scope in the game for the purpose of sniping.

Overall, the DT SRS is one of the best sniper rifles in the game. It is certainly a must-have in a player's inventory since it offers a unique combination of statistics not seen in any other sniper rifle. In general, it is more reliable and versatile than bolt-action sniper rifles.

Although the DT SRS cannot kill enemies with a single bullet (unless a headshot is achieved), the DT SRS can still kill enemies with two or three bullets at any range. With a very fast fire-rate and a large ammo capacity (both mag and reserve), the DT SRS is able to mow down groups of opponents faster than most other sniper rifles; it is only rivaled in this field by the two fully-automatic sniper rifles, which only have 10 rounds per magazine.

Since the DT SRS fires in the semi-automatic firing-mode, it doesn't have that lengthy and obtrusive "bolt-pulling" animation which is needed to eject used bullet casings from bolt-action sniper rifles. As such, the DT SRS can maintain constant vision on opponents in aim-to-sights mode, whereas bolt-action snipers usually rely on a one-hit-kill, or else the player can easily lose track of their opponents. Only a select few weapons in the game are both capable of one-hit-kills (with body-shots) and are also semi-automatic; this includes the TKPD Storm and TKPD Sniper.

Other statistics of the DT SRS which are similar to those of designated marksman rifles include its moderate accuracy, high mobility, moderate reload speed, moderate damage fall-off, and moderate effective distance. This encourages a sort of "mid-range sniper" play-style. The effective distance is still better than that of most assault rifles, but worse than many of the high-tier bolt-action sniper rifles. Some bolt-action sniper rifles, such as the Orsis T-5000, also have similarly high mobility, so this is not a statistic which is exclusive to the DT SRS.

One hidden feature of the DT SRS which is different from those of designated marksman rifles is that the DT SRS lacks crosshairs in the hip-fire mode. This is universal among sniper rifles. Not having crosshairs makes the weapon quite difficult to use in the hip-fire mode, though it is still more effective in this field than bolt-action sniper rifles due to its faster fire-rate and larger magazine size. Spamming at close range will usually result in a handful of bullets actually hitting the target, though this is a very inefficient usage of the weapon's ammo.

The DT SRS actually has very good accuracy in comparison to assault rifles. However, compared to sniper rifles, its accuracy is subpar. Since the DT SRS's scope is built-in, the DT SRS does not benefit from the +15 accuracy points which the scope usually provides (such as to the SV-98). Although the DT SRS is still reasonably accurate, it is not 100% accurate, which means that it is quite unreliable at very long distances until the player has acquired +17 accuracy points from Sniper Skills.

The DT SRS does not have access to Weapon Customization, though it does have a W-Task. However, the W-Task is one of the hardest in the game, which can only be completed by highly experienced players, or over a very long period of time. As such, most players will be restricted to using the DT SRS in its default mode. Nonetheless, the weapon is still great in its default mode due to its built-in scope, and it becomes nearly perfect with +17 accuracy points.

The DT SRS also closely competes with the EBR Marksman, a designated marksman rifle with somewhat similar statistics to the DT SRS. The EBR Marksman is quite heavy and has a slow switch-away speed, though it deals slightly more damage and has much higher penetration than the DT SRS. Furthermore, it features crosshairs. Overall, the DT SRS is better, though the EBR Marksman is still a viable alternative to the DT SRS, and it is more suitable for actual sniping, as long as the player has a good scope equipped on the weapon (it can access scopes through Weapon Customization, though unlocking them is very expensive).

"Secret modification for the DT SRS. Congratulations! This rifle is now silenced."

To complete the w-task you must achieve 40 stormkills with the DT SRS. This will add an H&K MP7A1 silencer and rename the weapon to DT SRS Silenced. 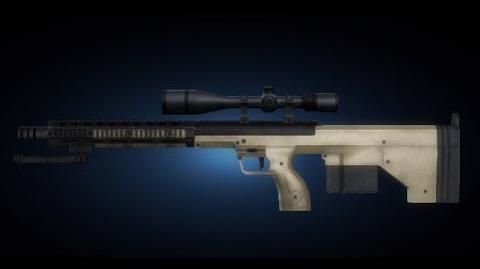 Retrieved from "https://contractwars.fandom.com/wiki/DT_SRS?oldid=27618"
Community content is available under CC-BY-SA unless otherwise noted.