The FN SCAR-H is a CR Assault Rifle from Set 6.

The FN SCAR-H uses 7.62 NATO rounds instead of the usual 5.56 NATO rounds. It is the heavier variant of its cousin, the FN Scar-L, having more accuracy, damage, and penetration.

If the player has fully-customized their FN SCAR-H, and has also Unbroken it, then it can suffice as their main assault rifle all the way up to Level 70. It is a very reliable weapon due to its high accuracy and low recoil.

The FN SCAR-H is one of the best assault rifles in the game, whether compared to CR or GP weapons. With very high accuracy, very low recoil, very low damage fall-off, and a very good effective distance, the FN SCAR-H features performance aspects from both assault rifles and designated marksman rifles; it is technically classified as a battle rifle (a heavy assault rifle).

The performance downsides of the FN SCAR-H are that it has low mobility and a low magazine size (as well as low ammo reserves); it also has a much slower fire-rate (but much higher damage) than several assault rifles, such as the M4A1 Custom. However, these downsides are not very significant if the weapon is being used as a marksman weapon. With a very fast reload speed, the FN SCAR-H can replenish its ammo very quickly, though it doesn't have too much reserve ammunition.

The FN SCAR-H comes equipped with the Aimpoint COMPM4 collimator and Noveske KX3 flash-hider by default, which are both some of the best attachments available. The W-Task of the FN SCAR-H, which is very tedious though actually quite easy (especially with the COMPM4 equipped), allows it to access the Elcan SpectreOS scope and the AN-PEQ 15 tactical device, both of which are also some of the best attachments available.

The main downsides of the FN SCAR-H are that it is very expensive to purchase and also to repair. After just one 10-minute game, the repair costs can be higher than 10,000 CR. It is recommended that the player Unbreak the weapon if they want to use it frequently. The W-Task might be worthwhile to purchase early if the player can't be bothered completing it, though it is certainly one of the easiest W-Tasks among high-tier weapons, so this isn't necessary, especially since the weapon has the COMPM4 equipped by default.

To acquire the W-Task for the SCAR-H, one must achieve 500 longshots with this weapon. This then changes the weapon from the "SCAR-H" to "SCAR-H Navy Seals", attaching an Elcan Spectre 4x Optics Scope to the rifle. Completing the W-Task also unlocks customization for the FN SCAR-H. See FN SCAR-H/Customization for more information. 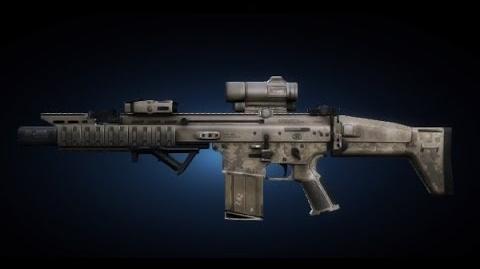 Retrieved from "https://contractwars.fandom.com/wiki/FN_SCAR-H?oldid=27847"
Community content is available under CC-BY-SA unless otherwise noted.