"417D is a battle rifle designed and manufactured in Germany by Heckler & Koch. It is a gas-operated, selective fire rifle with a rotating bolt and is essentially an enlarged HK416 assault rifle. Chambered for the full power 7.62x51mm NATO round, instead of a less powerfull intermeditate cartridge, the HK417 is intended for use as a designated marksman rifle."

The H&K 417D is a fully-automatic battle rifle, combining elements of sniper rifles and assault rifles into a single package. The H&K 417D sports remarkable effective range for a battle rifle, second only to the EBR Marksman, though its damage is fairly standard among battle rifles. The general statistics of this weapon allow it to tackle opponents at most ranges, especially given the high accuracy of the weapon for individual shots. However, the H&K 417D is hindered by severe recoil, making it more effective to utilize single-fire for ranged attacks, and automatic-fire for close encounters. The H&K 417D has low mobility, making it more suitable for a "camping" playstyle. However, the fast reload speed of the weapon, coupled with its ability to utilize automatic-fire, allows it to perform well in close encounters.

For its low tier requirement and relatively cheap price tag (more so during discounts), the H&K 417D delivers uncompromising performance and can go toe-to-toe against all higher-tiered weapons, CR and GP alike.

The H&K 417D has its own W-Task and Weapon Customization.

The most similar weapon in the game to the H&K 417D is the MK14 EBR CQB battle rifle, which is also fully-automatic. Overall, the performance of the H&K 417D is slightly better.

Compared to the TKPD Storm, QBU-88,KelTec RFB, EBR Marksman, DT SRS Mk.2, and SKS Carbine battle rifles, as well as the SVD-S, DT SRS, and TKPD Sniper medium-ranged semi-automatic sniper rifles, the main advantage of the H&K 417D is that it is fully-automatic. Disadvantages vary but include either lower damage-per-shot or lower mobility in different cases, or sometimes both such as in the case of the SKS Carbine.

The H&K 417D also competes with the DesertTech MDR, FN SCAR-H and DSA SA58 Operational Special Weapon fully-automatic assault/battle rifles. Compared to these weapons, the H&K 417D has a better effective range, better damage, and higher accuracy, at the cost of lower mobility.

Further competitors of the H&K 417D include the VSS Vintorez and SVU-AS fully-automatic sniper rifles. Compared to these weapons, the main advantages of the H&K 417D are its much larger clip size and the fact that it displays crosshairs when fired from the hip (though, all weapons lose these crosshairs in HardCore Mode).

A final unique competitor of the H&K 417D is the AN-94 unique assault rifle. The AN-94 performs in most respects like an ordinary assault rifle. However, the first two shots of any barrage of bullets always fire with nearly perfect accuracy and almost no recoil. Effectively, this makes the AN-94 a combination of a medium-ranged sniper rifle and an assault rifle, placing it into a similar niche as the H&K 417D. The AN-94 outclasses the H&K 417D in all areas aside from reload speed, effective distance, and damage-per-second during extended barrages (though the damage-per-shot of the AN-94 is essentially higher). However, the AN-94 is a somewhat complex weapon due to its unique firing mechanics.

The W-Task of the H&K 417D is 250 longshots. Finishing it will give 417D an ACOG optic and is renamed into 417 D ACOG, which provides better accuracy and reduced recoil as a trade for lower mobility. Completing the W-Task also unlocks customization for the H&K 417D. See H&K 417D/Customization for more information. 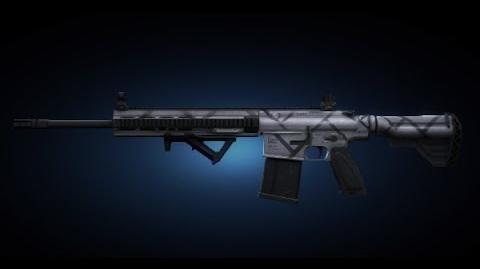