The HK G36C is a Set 4 premium assault rifle.

The H&K G36C features a unique combination of statistics, drawing from both ultra-compact assault rifles and marksman rifles. Although its damage is subpar at all ranges, whether close, mid, or long, the H&K G36C is remarkably accurate, features a good effective distance on par with weapons like the M4A1 Custom, and is also very light. This potent combination of statistics encourages both a fast-paced and precise marksman play-style.

Notably, the H&K G36C features the best effective distance, by a significant margin, of any weapon with 70 mobility points or more.

The H&K G36C is the original model which the H&K 243 light machine gun is based on. Compared to the H&K 243 LMG, the H&K G36C is lighter, reloads faster, deals more damage per shot, has a slower fire-rate, is less accurate, and features a much smaller magazine size (30 rounds vs 100).

The W-task for the G36C is 100 doublekills. Completing it will unlock the ACOG scope and AAC SND-9 rifle silencer, as well as some attachments in the weapon customization tree.

The scope greatly improves the G36C's performance in longer-ranged battles, and the silencer offers a stealth bonus. 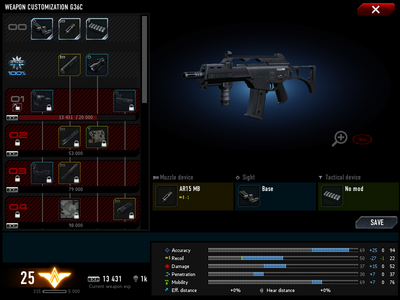 Ditto, tasked ADS
Add a photo to this gallery

Retrieved from "https://contractwars.fandom.com/wiki/H%26K_G36C?oldid=27968"
Community content is available under CC-BY-SA unless otherwise noted.