"Produced by the german defense manufacturing company Heckler & Koch, the MP5k is a shortened version of the MP5, the most popular submachine gun in the world. It was designed specifically for police and SWAT teams performing tasks in urban settings."

The H&K MP5K is a Tier 1 submachine gun.

The H&K MP5K is the second-earliest SMG available to new players, after the Kedr, and the first with 30 rounds in each magazine. Like most other credits-purchasable Set 1 weapons, it performs best at close-range, on maps like Bay 5 and Evac.

The H&K MP5K features the best combination of accuracy and recoil in comparison to other CR full-auto primary weapons from Set 1, including the Kedr, KAC PDW, and AKS74U. However, the H&K MP5K has one of the worst "visual recoil" animations in the game, which makes it much more difficult to aim than one might initially imagine.

The H&K MP5K is a decent SMG for servers up to Level 40. Beyond that level, the H&K MP5K should probably be replaced by a more powerful SMG such as the Magpul PDR-C.

The H&K MP5K features severe visual recoil in comparison to more advanced SMGs such as the Magpul PDR-C, H&K MP7, and PP-19-01 Vityaz-SN. Even the KAC PDW has slightly better visual recoil than the H&K MP5K. This gives the illusion that the H&K MP5K is an inaccurate weapon.

The H&K MP5K's penetration stat of 20 points is quite low in comparison to those of the best SMGs, which tend to have at least 30 points of penetration.

To complete the W-Task, you must achieve 5 DoubleKills. When completed, you will gain a Kobra collimator and a Gemtech Raptor2 silencer. This makes the recoil and muzzle flash more manageable, and the sight is more clear. However, the effective range does get lowered. Completing the W-Task also unlocks customization for the H&K MP5K. See H&K MP5K/Customization for more information.

The H&K MP5K can be customized with collimators, optics, silencers, muzzle-breaks, flash-hiders, and tactical devices.

Unlike the Kedr, the H&K MP5K has access to a single low-zoom optic in the final MetaLevel of its Weapon Customization, the ACOG. The ACOG is affected by the Sniper Clan Skill "Sniper Specialization III" which allows the player to change the zoom of optics (though not the zoom of collimators).

The H&K MP5K has access to a single flash-hider, the Noveske KX3. Flash-hiders are useful if players want to remove muzzle-flash, as a silencer does, but do not want to bear the heavy damage penalties and other downsides which silencers bring. Flash-hiders do not unlock "Stealth Mode", so the player is still visible on the Mini-Map when shooting. 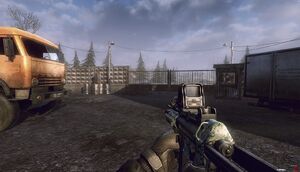 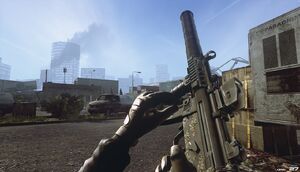 MP5k firing while aiming down sights

MP5k switch animation
Add a photo to this gallery

Retrieved from "https://contractwars.fandom.com/wiki/H%26K_MP5K?oldid=27867"
Community content is available under CC-BY-SA unless otherwise noted.