The IWI X95-R, like the M4A1 Custom, is a rapid-fire mid-ranged assault rifle. The rapid fire-rate of the weapon, which is slightly higher than that of the M4A1 Custom, allows the weapon to mow down opponents at close range. Meanwhile, the good effective distance and various other stats make this weapon great for mid-range as well. However, the high recoil of the weapon makes it worse than the M4A1 Custom for long-range combat.

Overall, the IWI X95-R is a great weapon. It isn't particularly overpowered, but it is decent enough to compete with some of the best weapons in the game.

The IWI X95-R is equipped with the Mepro 21 reflex sight by default.

X95-R W-task is 30 triplekills. But when checking what the W-Task is in-game, it reads "classified". Finishing it will give X95 a SWR Spectre Silencer and is renamed to X95-R Silenced, giving it stealth capability and making it more accurate, as well as lowering its recoil as a trade for lower damage and mobility. To buy the W-task, it costs only 175 GP, which is probably an easier amount to collect than to acquire 30 triplekills. 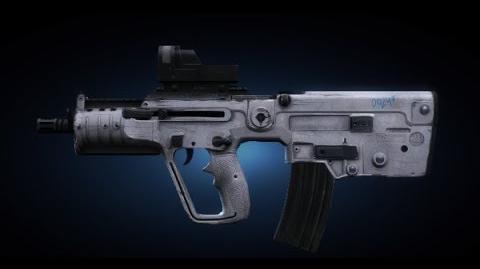 Retrieved from "https://contractwars.fandom.com/wiki/IWI_X95-R?oldid=27826"
Community content is available under CC-BY-SA unless otherwise noted.