The KRISS Vector is a submachine gun from Set 4.

The KRISS Vector is available with unbreakable status for free to players who reach level 30.

The KRISS Vector's statistics are mostly underwhelming aside from one key statistic—fire-rate. The KRISS Vector features the fastest fire-rate in the game by a significant margin, which also provides it with the highest damage-per-second among SMGs. However, the extremely fast fire-rate is notorious for rapidly draining the weapon's ammo.

Overall, the KRISS Vector is a very good SMG. However, it is mainly limited to just close-range or mid-range at best. It is the archetypical SMG.

The KRISS Vector features low accuracy, at 55 points. The only SMGs with worse accuracy are the PPSh-41 (AC: 33) and Kedr (AC: 48). The KRISS Vector cannot equip tactical devices, reducing its maximum accuracy.

The KRISS Vector features moderate recoil, at 55 points. Its recoil is only 3 points higher than the Magpul PDR-C's recoil (RC: 52). In comparison to the SR2M Veresk (RC: 79), the KRISS Vector actually has surprisingly low recoil when considering its extremely fast fire-rate.

The KRISS Vector has an above-average damage stat in comparison to other SMGs, at 34 points. This is identical to the damage of the Magpul PDR-C and SR2M Veresk. Eleven SMGs have lower damage whereas three SMGs have higher damage (note: the FN P90 DEVGRU actually has higher damage with a silencer equipped since it doesn't lose any damage from its built-in silencer).

The KRISS Vector's penetration stat of 20 points is quite low in comparison to those of the best SMGs, which tend to have at least 30 points of penetration.

The KRISS Vector's fire-rate is the best among SMGs and also the best in the game among all weapons, at 110 points.

The KRISS Vector holds 30 rounds per magazine, which is standard among SMGs. Meanwhile, it holds 5 (max: 8) additional mags in reserve, giving it a total ammunition count of 180 (max: 270) rounds. This is below-average among SMGs. Also, the SR3M holds 6 (max: 9) additional mags or 210 (max: 300) rounds in total, which makes the SR3M generally more competitive than the KRISS Vector (they fill the same niche).

The W-Task of the KRISS Vector is 1 ProKill. This provides the Cobra collimator and the Solid Sand camo (infrequent).

The KRISS Vector is customizable with collimators, optics, silencers, muzzle-brakes, and flash-hiders.

The KRISS Vector is unique among primary weapons since it has access to a number of Weapon Modifications which can usually only be equipped by pistols (note: the SR2M Veresk and Skorpion EVO also have access to some of these mods). These mods include the AAC TI-RANT silencer, Buzzsaw muzzle-brake, LWC compensator (+ flash-hider), Multi-Comp Bushing compensator, and SilencerCo Osprey 9 silencer.

The Buzzsaw muzzle-brake, Multi-Comp Bushing compensator, and LWC compensator all remove huge amounts of recoil (45%, 30%, or 27% respectively) and provide various other perks such as increased accuracy, increased effective distance, and even the removal of muzzle-flash in the case of the LWC. For most other primary weapons, unless they can equip the BRTT compensator (-40% recoil), the best recoil-reducing muzzle-brake which they can access is the Tromix Monster muzzle-brake, which removes a solid 14 recoil instead of a percentage. 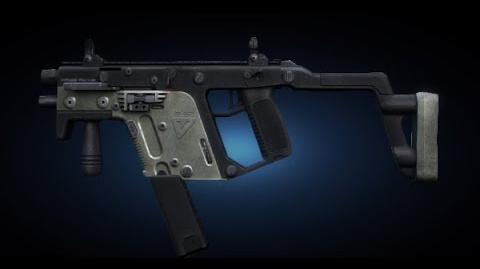 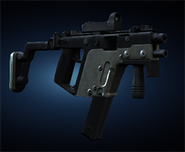 KRISS Vector reloading
Add a photo to this gallery

KRISS Vector w-task reloading
Add a photo to this gallery

Retrieved from "https://contractwars.fandom.com/wiki/KRISS_Vector?oldid=27856"
Community content is available under CC-BY-SA unless otherwise noted.