"The Mosin-Nagant (Tryohlyneika) is a 7.62 mm bolt-action, internal magazine-fed military rifle, developed by the Imperial Russian Army 1882-1891. It was used extensively in World War II by soviet snipers and it still considered one of the most accurates rifles in the world."

The Mosina is a premium tier 1 sniper rifle.

The Mosina is the second most accurate rifle in the game, boasting an impressive 100 accuracy out of the box. The rifle has outstanding stats comparing to most sniper rifle, having above 100 damage out to 315 meters, very low recoil, moderate mobility and good penetration. However, the rifle biggest drawbacks is that it has the lowest rechambering time of all bolt action sniper, and each bullets is loaded manually at a relatively low speed during reloading. Other reason that prevent experienced players from actively using the rifle in normal mode is that the rifle is equipped with an old WW2-era PU 91/30 scope, which is slightly off-centered and the targeting tick and scope rim are deemed "too thick and obtrusive" by a large amount of players. However with practice or hipfire while standing, this problem can be reasonably mitigated. The rifle is also very loud and does not have access to a silencer.

In Hardcore mode, on the other hand, the Mosina can be an excellent rifle in capable hands. As the rifle use can only be reloaded by manual bullet chambering, each bullets are loaded individual and therefore there is no waste of ammo if the ammo in the magazine box is not completely used up prior to reloading. Also, 100 base accuracy allows for easy hip-firing with near-perfect accuracy while standing still. However, the benefits of the rifle does not seems to outweigh its hefty 1050 GP permanent buy price tag, and hence making it highly underused by players. 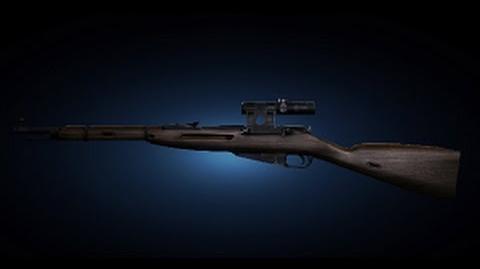 Retrieved from "https://contractwars.fandom.com/wiki/Mosina?oldid=25743"
Community content is available under CC-BY-SA unless otherwise noted.