"The OTs-33 Pernach is an automatic pistol designed to replace the APS within Russian special forces and paramilitary units. The Pernach was developed in 1995 by Igor Stechkin and later went into limited production at the KBP Instrument Design Bureau."

The OTs-33 Pernach is a premium tier 3 handgun.

The OTs-33 Pernach is a fully-automatic pistol which features a high magazine capacity, high ammunition reserves, moderate damage, a fast fire-rate, a slow reload speed, and below-average mobility for a side-arm. It is best suited for enclosed maps or large maps with lots of solid obstacles and performs especially well as a back-up weapon alongside sniper rifles or shotguns, due to its performance being comparable to certain SMGs, especially the Bizon-2B or H&K UMP45.

There is currently no W-Task available for the OTs-33 Pernach, though there is Weapon Customization.

The OTs-33 Pernach directly competes with other fully-automatic pistols or secondary SMGs, currently consisting of the APS, Glock 18, Enforcer (Beretta FA), and IWI UZI PRO. This group of weapons can be roughly divided into the "very high fire-rate but very low damage" group and the "fast fire-rate and moderate damage" group. The OTs-33 Pernach falls into the latter group, alongside the APS and Enforcer (Beretta FA).

Compared to the Glock 18 and IWI UZI PRO, the most distinctive disadvantages of the OTs-33 Pernach are its much slower fire-rate and much lower mobility. Hence, these other two fully-automatic side-arms are much more suitable for an aggressive, fast-paced playstyle in comparison. However, the distinctive advantages of the OTs-33 Pernach are its higher damage-per-shot and higher ammunition reserves. This makes the OTs-33 Pernach much better at conserving ammunition, which will be very useful in the long run for players aiming to achieve high killstreaks.

The Enforcer (Beretta FA) is slightly or greatly superior to the OTs-33 Pernach in most areas except for individual magazine capacity and total ammunition reserves, which, as previously stated, are also two of the most distinctive advantages of the OTs-33 Pernach in comparison to other fully-automatic side-arms; hence, the OTs-33 Pernach still fits very comfortably into its own distinct niche. However, the Enforcer (Beretta FA) does not currently have access to Weapon Customization or a W-Task, and without the help of a potential flash-hider or silencer, the Enforcer has severe muzzle-flash, making it difficult to aim-to-sights with.

The OTs-33 Pernach can be customized with collimators, silencers, muzzle-breaks, and tactical devices. 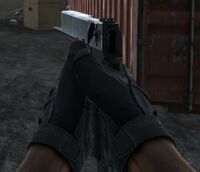 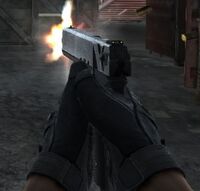 OTs-33 Pernach icon.
Add a photo to this gallery

Retrieved from "https://contractwars.fandom.com/wiki/OTs-33_Pernach?oldid=26213"
Community content is available under CC-BY-SA unless otherwise noted.