Old Sawmill (often abbreviated as OSM) is a map in Contract Wars.

OSM consists of multiple wooden buildings distributed over the map in which the player can hide if the situation is not on his favor, but it is a more than obvious place to hide and smart players often check those building in order to find enemies.

About half the map is covered with trees and other foliage, making it sometimes hard to spot enemies without thermal vision.

The map is very big, so many players take to option of bringing a sniper rifle to have more range of fire. If you do so, make sure a) you have a very good secondary or b) don't camp and move with your team, so they can cover you.

This map gives the player the option of using another strategy that can be a serious game changer when it works, called "flanking", a move in which the player attacks the enemy from the sides or from behind. Being hidden and staying out of the enemy field of view is very important in order to kill the enemy VIP, which is the common use of this move.

But beware, some players are specialized in finding flankers by covering their teams flanks and back.

The recommended weapons to use here are Assault Rifles such as the FN SCAR-H, M4A1 Custom and others. And of course, Sniper Rifles like the SV-98, M40A6 and Orsis T-5000.

At the beginning of each round, the team that spawns at the top left corner (usually USEC) can cover the area between BEAR's spawn and the big wooden house with sniper rifles, going there holds a high probability of death. 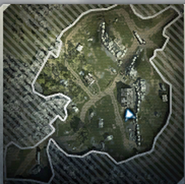 Ditto
Add a photo to this gallery
Retrieved from "https://contractwars.fandom.com/wiki/Old_Sawmill?oldid=23666"
Community content is available under CC-BY-SA unless otherwise noted.