"The PPSh-41 (Pistolet-Pulemyot Shpagina) is a soviet submachine gun designed in 1941 by Georgi Shpagin as an unexpensive simplified alternative to the PPD-40. The now legendary Papasha was used by the soviet army in World War II."

The Shpagina SMG is considered the ultimate "spray and pray" gun of Contract Wars by many players. Featuring a staggeringly generous 71 rounds per magazine capacity, coupled with an excellent rate of fire and decent damage and mobility, the PPsh is capable of outlasting every enemy you have, delivering massive suppression fire down range while the opponents are left reloading. With the damage model it possesses, low penetration is largely mitigated. It is greatly hindered, however, by a terrible 33 accuracy, ridiculous 74 recoil and 52 reload speed, which is slightly lower than other SMG. Even with the best skill tree possible, the SMG still has the maximum accuracy of 63, and like most other SMG, its range is fairly low, making it unsuitable for mid range combat.

The strategy for this gun is simple: point at general direction of the enemy and go full automatic. Take advantage of the mobility you have by strafing left and right to making it hard for your enemy to hit you and never stop moving. Walking and aim down sight for extra accuracy is somewhat viable if you have every accuracy skill available (27 accuracy from sniper skill tree, 10 accuracy from clan scout skill, x1.3 moving accuracy, 80 accuracy in total), but the recoil just will not help you to stay precise on target.

The PPSh-41 currently only has a dummy, near-impossible-to-achieve W-Task of 10 triple kills in near-death condition (<20 health), and does not reward anything that benefits the gun in any way. 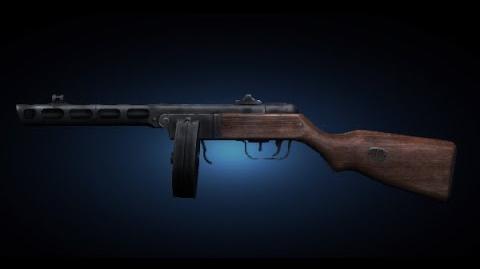 Contract Wars PPSH-41 Shooting Test
Add a photo to this gallery
Retrieved from "https://contractwars.fandom.com/wiki/PPSh-41?oldid=27891"
Community content is available under CC-BY-SA unless otherwise noted.