"Produced by the Brazillian manufacturing conglomerate Forjas Taurus, the Raging Judge is a hunting revolver that shoots .410 buckshot shells.  Along with the phenomenal damage, the revolver is light and perfect for CQB.  Its tactical capabilities are equivalent to a light semi-automatic shotgun."

The Raging Judge is a tier 1 premium handgun.

The Raging Judge is a buckshot revolver. It is one of only two secondary weapons capable of firing buckshot rounds, the other being the Sawed-Off IZH-43.

The Raging Judge has many hidden and cosmetic statistics.

The Raging Judge fires buckshot rounds, which means that accuracy and recoil are merely cosmetic statistics (since they don't affect the weapon at all). These statistics would matter if the weapon was able to use slug ammo, but it cannot.

The Raging Judge has fixed accuracy and recoil, meaning that it cannot lose or gain accuracy or recoil, regardless of what Skills the player possesses and regardless of the statistics which are being displayed. This also means that firing consecutive shots, firing whilst being shot, and firing whilst moving (including whilst jumping) does not change the accuracy and recoil of the weapon. However, the Raging Judge has random pellet spread, which means that the 5 individual pellets fired per shot will always skew away from the crosshair to a random degree.

Finally, the Raging Judge features what is perhaps the slowest "switch-away" speed of any weapon in the game. This is a trait which it seems to share with the EBR Marksman rifle, which has a very similar switch-away speed. The "switch-to" speed of both weapons is still normal. Having a slow switch-away speed means that the player will be left vulnerable when trying to switch from the Raging Judge to their other equipped weapon/s.

All in all, the Raging Judge should not be judged by its displayed statistics.

When taking into account its real statistics, the Raging Judge is a weak but precise semi-automatic shotgun which reloads its entire clip in one go. Its fire-rate is not particularly fast, being slower than that of the Sawed-Off IZH-43 but faster than that of, for example, the KelTec KSG. The Raging Judge has only 5 pellets per round, significantly reducing the chance that the player will hit their target, but increasing the damage for each individual pellet.

Because of its lack of pellets, it often requires 2-3 shots from the Raging Judge at close range to kill an opponent, despite the fact that each shot can deal a maximum of 150 damage (without Skills). At long range, it can often require an entire 5-round clip in order to kill an opponent. If the player can't manage to kill an opponent with an entire 5-round clip, then they will be left very vulnerable by both the slow reload speed and the long switch-away speed. However, since the Raging Judge reloads its entire clip in one go, it is somewhat more efficient than pump-action shotguns at reloading.

Overall, the Raging Judge functions as a hybrid between a semi-automatic shotgun, such as the Saiga 12K, and a revolver, such as the Colt Python Elite. It isn't particularly great at both long-range and close-range combat. Hence, it performs best at mid-range. 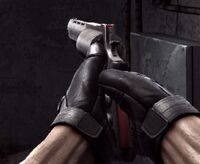 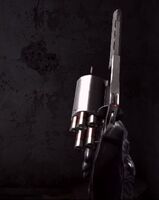 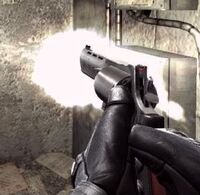 Raging Judge Icon
Add a photo to this gallery

Retrieved from "https://contractwars.fandom.com/wiki/Raging_Judge?oldid=27613"
Community content is available under CC-BY-SA unless otherwise noted.