"The SV-98 (Snaiperskaya Vontovka Model 1998) is a Russian bolt-action sniper rifle designed to engage various targets at range up to 1,000 m. It is mainly used by Russian law enforcement and some counter-terrorist forces."

The SV-98 (aka Snaiperskaya Vintovka Model 1998) is the first sniper rifle which is available to players. It is also the first bolt-action sniper rifle. It is relatively cheap, especially in comparison to every other sniper rifle in the game. The SV-98 is equipped with the Nightforce NXS 5.5 22x50 scope by default.

Compared to other sniper rifles, the SV-98 features low accuracy (note: the base accuracy is low, but the stock scope causes it to have perfect accuracy by default), high recoil (note: cosmetic), moderate damage, very high penetration, an extremely slow fire-rate, moderate mobility, a very slow reload speed, very low damage fall-off, a very good effective distance, a standard magazine size of 10 rounds, and a standard amount of reserve ammunition. The SV-98 is a bolt-action weapon which needs to complete a "bolt-pulling" animation after every shot.

Overall, the SV-98 is a great sniper rifle for novice players. Previously, it was terrible, but it has been buffed tremendously over the past couple of years. The SV-98's main strength is that it has access to Weapon Customization, which causes its default scope to increase its accuracy to 100 points, thus making it the most accurate sniper rifle up until the AWM-F, a CR bolt-action sniper rifle from Set 5.

Since the SV-98 features a bolt-action, the player needs to manually eject used bullet casings after every shot; this can be achieved by pressing the "fire" button or by pressing the "reload" button (only in the hip-fire mode). Doing this will cause the weapon to display an obtrusive "bolt-pulling" animation; this will blacken the scope and shake it around whilst the player is in the aim-to-sights mode, which can cause the player to lose track of their target if they do not achieve a one-shot-kill.

Although the SV-98 has low accuracy in comparison to other sniper rifles, its scope grants it with +15 accuracy points, giving it a total of 100 accuracy points by default. However, the weapon loses accuracy with usage, by default. It is recommended that the player Unbreak this weapon (cost = 100 GP) if they intend to use it as their main sniper rifle. This will ensure that it always maintains full accuracy.

The SV-98 features a combination of great damage and great penetration. It is generally capable of killing opponents with one body-shot (to the chest) as long as it is dealing full damage. However, once its damage starts to drop, which occurs when shooting at opponents at long-range (which is the range that this rifle is most suitable for), the SV-98 will be less likely to kill opponents with one body-shot. Hence, at very long ranges, the player needs to aim for the head to ensure a one-shot-kill.

If the player does not have +17 accuracy points from Sniper Skills, then the SV-98 is the best sniper rifle until they can purchase the AWM-F from Set 5 (you need to be level 40 to reach Set 5 unless you Pre-Unlock it).

The Orsis T-5000, a premium sniper rifle from Set 6, is essentially a straight upgrade to the SV-98, following the exact same performance model except that it deals significantly higher damage. It is also much more accurate, but this is irrelevant since there is no difference between 100 accuracy points and anything higher than that. Hence, if the player enjoys using the SV-98, then it is recommended that they purchase the Orsis T-5000 once they reach an advanced level, or if they can afford to purchase it at a lower level.

Other sniper rifles generally have worse accuracy (which can be patched up with +17 accuracy points from Sniper Skills), effective distances and damage than the SV-98 but usually have other advantages. For example, they often have faster fire-rates and can fire in the semi-automatic and/or fully-automatic firing modes; all rifles which are semi-automatic and/or fully-automatic lack the bolt-pulling animation, giving them a huge advantage in terms of visibility when the player is in aim-to-sights mode.

The only semi-automatic sniper rifle which deals more damage than the SV-98 is the TKPD Sniper, a premium sniper rifle from Set 2, making it a strong competitor against the SV-98 once the player has unlocked +17 accuracy points. However, it doesn't have access to Weapon Customization or a W-Task, cannot equip a silencer (hence, it is always very loud), and has very low mobility. The TKPD Storm, a premium designated marksman rifle from Set 1, is essentially a near-straight upgrade to the TKPD Sniper, but the player needs to spend a lot of GP on Weapon Customization (to get a high-zoom scope) in order to make the TKPD Storm better than the TKPD Sniper; hence, the TKPD Storm is not a strong competitor against the SV-98 at low levels.

The SV-98 is generally better than the M40A6, a CR bolt-action sniper rifle from Set 3, since it has higher accuracy, higher damage, and higher penetration. The M40A6 has higher mobility, which is its only real upside in comparison. Otherwise, the two weapons are fairly similar to one another.

Version of SV-98 equipped with a silencer. Allows you to fire substantially increasing the detection time of your position.

To acquire the W-task you must achieve 15 Ragekills. The SV-98 with W-task equipped will be renamed to Silent SV-98 and will add a rifle silencer. Completing the W-Task also unlocks customization.

The SV-98 can be customized with collimators, optics, iron sights, silencers, muzzle-brakes, and flash-hiders.

The stock scope of the SV-98, which has around x6 zoom, is generally the best in the game for the purpose of long-distance sniping. Collimators are not recommended for this weapon, though other scopes are all decent for this weapon, even the Trijicon ACOG, which has x2 zoom; there are also two scopes with x4 zoom which the SV-98 can use. The SV-98 can use iron sights; the model of the iron sights doesn't render properly when viewing the weapon in the inventory; in-game, it is given iron sights which are somewhat comparable to those of the AKMS; they are very low and close to the barrel.

The SV-98 greatly benefits from having either the KelTec RF-500 or Surefire MB338SS01 muzzle-brakes equipped. These muzzle-brakes increase the weapon's effective distance; the latter one also provides +3 accuracy. There is no need to reduce recoil for this weapon since its recoil statistic is essentially cosmetic. The main downside of these muzzle-brakes, alongside a slight loss of mobility, is an increase in the hearing distance, allowing opponents to locate the player more easily. They also, of course, prevent the player from being able to equip a silencer.

Various silencers can be equipped by the SV-98. The silencer with the best overall statistics for long-range combat is the SilencerCo Osprey silencer, due to its low reduction of damage and its non-reduction of effective distance; however, it is the heaviest silencer. The SOCOM Monster silencer is also quite good if the player has +17 accuracy from Sniper Skills. Silencers which remove much of the effective distance are undesirable unless the player, for some reason, plans on using the SV-98 at close-range only.

The SV-98 doesn't really need the single flash-hider which it has access to, though it doesn't hurt to equip the flash-hider if the player doesn't want to equip any other type of muzzle-device.

The SV-98 cannot equip tactical devices. The only bolt-action sniper rifle which can do this is the AWM-F. 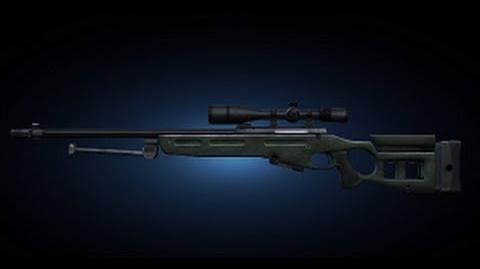 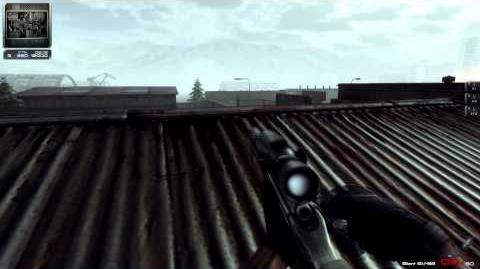 SV98 in-game use
Add a photo to this gallery
Retrieved from "https://contractwars.fandom.com/wiki/SV-98?oldid=26684"
Community content is available under CC-BY-SA unless otherwise noted.