The SVU-AS is a tier 6 sniper rifle.

The SVU-AS is a fully-automatic sniper rifle, one of only two in the game alongside the VSS Vintorez.

In comparison to bolt-action sniper rifles, the SVU-AS features moderately low accuracy, average recoil (note that the effects of recoil are much more severe for fully-automatic weapons), low damage, low penetration, a very fast fire-rate, high mobility, a fast reload speed, high damage fall-off, a very bad effective distance, an average magazine size (most sniper rifles only have 10 rounds per clip, aside from one with 5 and one with 20), and a high amount of reserve ammunition.

Perhaps the biggest downside of the SVU-AS, though something which is irrelevant in HardCore Mode, is that the SVU-AS does not have crosshairs when fired from the hip. This severely limits its potential as a close-range offensive weapon, although it would be excellent for close-range combat if it did have crosshairs.

Furthermore, with the base weapon modifications attached, the SVU-AS doesn't have any sort of collimator or scope, which severely limits its potential at long range, which is already an area where the SVU-AS doesn't perform too well anyway. Essentially, with the SVU-AS, you will be firing blind, since you'll have nothing to help guide your aim apart from the iron sights. With only ten rounds in each magazine, you won't be able to effectively spam bullets and hope that some of them will hit your target. This further makes the SVU-AS a very difficult weapon to use.

Overall, the SVU-AS is a great weapon, but it is very difficult to use. Furthermore, it doesn't exactly fill the role of a classic sniper rifle, and instead functions more similarly to certain battle rifles.

The SVU-AS suffers much more from its high recoil in comparison to most other sniper rifles. Due to its fast fire-rate, the recoil doesn't have much time to "cool off", meaning that the weapon will lose accuracy with consecutive shots fired. This can be both a downside and an upside. In situations where you want to hit an opponent who is very far away, the high recoil will highly limit your ability to hit that opponent with consecutive shots, which is a very bad trait for a sniper rifle which already isn't able to achieve regular instant-kills with only body-shots. As for this being an upside, the recoil makes it much easier to hit opponents at close range in comparison to most sniper rifles. With regular sniper rifles, close-range combat is comparable to using slugs with a shotgun, which is generally a very ineffective strategy unless you have a red dot on your screen. However, the SVU-AS essentially has bullet spread, which allows you to hit your opponent without even pointing directly at them. This is comparable to using buckshot rounds with a shotgun.

In order to achieve the w-task, one must achieve 400 longshots with the weapon. The tasked SVU-AS will be renamed to SVU-AS PSO, which adds a PSO scope to the weapon.

The SVU-AS can be customized with collimators, optics, silencers, muzzle-breaks, and flash-hiders.

The default flash-hider of the SVU-AS seems to be one-of-a-kind. As of yet, no other weapon can equip this unique flash-hider. There is only one other flash-hider in the game, the Noveske KX3 Flash-hider, and most weapons can equip that one. 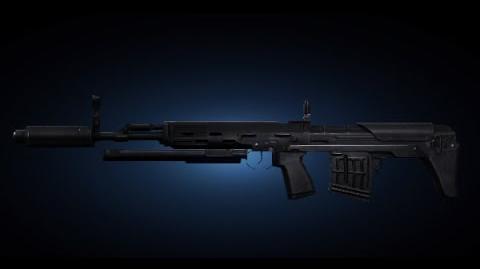 SVU-AS Shooting Test
Add a photo to this gallery

Retrieved from "https://contractwars.fandom.com/wiki/SVU-AS?oldid=26328"
Community content is available under CC-BY-SA unless otherwise noted.