"Tactical Intervention Systems have redesigned the famous 12.7mm caliber semi-automatic pistol Desert Eagle with a special tactical modification that aims to increase its ergonomics.  Its huge damage comes at the expense of huge recoil."

The TIS Desert Eagle is a premium tier 1 handgun.

The TIS Desert Eagle is an extremely powerful pistol. It deals the highest damage-per-shot of any semi-automatic pistol and the fourth-highest damage-per-shot of any side-arm, behind the Raging Judge (buckshot revolver), Sawed-Off IZH-43 (double-barreled shotgun), and Tanfoglio Thor .500 (single-charge pistol). Similarly to all of these side-arms, the TIS Desert Eagle's penetration is lacking, though it is still significantly better than their respective penetrations.

The TIS Desert Eagle is disregarded by many elite players due to its cumbersome statistics. However, it is a very good side-arm to complement primary weapons with short effective distances, especially shotguns and SMGs.

The TIS Desert Eagle, similarly to the Tanfoglio Thor .500, is plagued by an absurd level of both actual recoil and visual recoil. The actual recoil means that the TIS Desert Eagle must be fired slowly at longer ranges in order to be used effectively as a "pocket sniper". The visual recoil simply makes the weapon very difficult to aim-to-sights with since the collimator or optic sight is completely obscured after every shot.

In close combat scenarios, the TIS Desert Eagle is a decent weapon, due to its very high damage. However, it is quite difficult to aim, and it generally takes 3-4 body-shots to kill an opponent (with armor), which depletes half the clip if each shot connects, or can end up depleting the entire clip if the user misses shots, which often happens. This leaves the user very vulnerable, due to the lengthy reload.

The TIS Desert Eagle really shines at medium to long-range, where it can deal much more damage than other semi-automatic pistols. It still isn't as good as the Smith&Wesson Stealth Hunter at long-range, though, and it pales in comparison to the Tanfoglio Thor .500, which deals an absurd amount of damage at long-range. Since the TIS Desert Eagle is quite difficult to aim with when firing consecutive shots, it is advisable that the user carefully aims for the head with the first shot, in order to be likely to get a 1-shot kill or at least have an easier time with follow-up shots.

The Colt Python Elite is essentially a cheap substitute for the Smith&Wesson Stealth Hunter, with overall worse performance than both the Smith&Wesson Stealth Hunter and the TIS Desert Eagle. However, the Colt Python Elite's single striking advantage is its much faster firing speed, making it somewhat more reliable than both weapons at close-range.

The W-task for the TIS Desert Eagle is 15 Stormkills. Finishing it will give this gun a Leupold Deltapoint compact collimator and give you access to have FX-11 scope on the first metalevel and a silencer for the 3rd metlvl. Completing the W-Task also unlocks Customization, although metalevels can be unlocked with GP before completing the W-Task. See TIS Desert Eagle/Customization for more information. 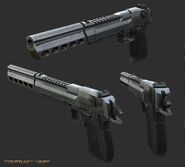 Retrieved from "https://contractwars.fandom.com/wiki/TIS_Desert_Eagle?oldid=26264"
Community content is available under CC-BY-SA unless otherwise noted.