"Legendary pistol made by Tulskiy and Tokarev, passed a lot of wars and military conflicts. Special weapon for scout loaded with special armor piercing ammo."

The TT is a SPEC handgun.

The TT is a powerful pistol from the SPEC set which features characteristics similar to those of the M1911A1 and Springfield Operator TRP. Despite the small magazine size, the TT dishes out massive damage at a decent rate of fire. Furthermore, the TT possesses very low damage fall-off and a very good effective distance and can thus tackle opponents at all ranges. A unique trait of this weapon is its extremely high penetration, higher than even that of most assault rifles.

Due to the potent damage-focused statistics of the TT, most elite Contract Wars players consider it to be at least the best semi-automatic pistol in the game, if not the best side-arm in the game. However, the TT, being a SPEC weapon, does cost nine additional Skillpoints to unlock if the player has already purchased all of the pistol Skills. These nine Skillpoints can often be better spent elsewhere if you do not possess more than 70-90 Skillpoints in total. Hence, many non-elite players, who are tight on Skillpoints, prefer the GSh-18 instead, which deals less damage but possesses magazines more than twice as large as those of the TT.

When a player achieves 200 headshots with the gun they are given a silencer and the weapon is renamed to TT silenced.

With the Silencer Parts Alignment Skill, the TT won't lose any damage from the silencer.

The TT has no Weapon Customization. 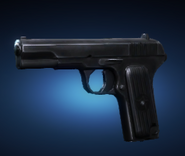 Retrieved from "https://contractwars.fandom.com/wiki/TT?oldid=26258"
Community content is available under CC-BY-SA unless otherwise noted.