The VSS Vintorez is a tier 5 sniper.

The VSS Vintorez is the first fully-automatic sniper rifle available for purchase, before the SVU-AS. Although it is initially cheap to purchase, it has some significant initial flaws. These can be patched up with Skills, Weapon Customization, and Unbreaking.

By default, the VSS Vintorez is equipped with a built-in, undetachable silencer, as well as with iron sights similar to those used by the AK weapon series. The VSS Vintorez is incapable of equipping muzzle devices or tactical devices, though it can equip most types of sights, including high-zoom optical sights.

Due to being a sniper rifle, the VSS Vintorez doesn't have crosshairs when fired from the hip.

The VSS Vintorez is best used as a support weapon or as a flanking weapon. It combines elements of assault rifles and sniper rifles, making it extremely versatile, though it isn't the most effective weapon at any single task; e.g. pure assault or pure sniping.

The VSS Vintorez features a unique combination of statistics, with aspects borrowed from both assault rifles and sniper rifles.

Overall, the VSS Vintorez can be considered one of the best weapons in the game, at least for the niche role which it serves. It is an extremely versatile weapon, capable of equally excelling on maps as small as Bay 5 and as large as Lighthouse. The combination of a small magazine size, a moderately slow reload speed, a very fast fire-rate, and very high recoil can make the weapon difficult for novice players to use, especially without damage+accuracy Skills and a good sight from the W-Task or Weapon Customization. However, once the player does have all of these things, the VSS Vintorez will become an extremely potent weapon, capable of long-range sniping, mid-range assault, and close-range spraying.

At mid to close-range, the lengthy reload speed of the VSS Vintorez, though manageable when tackling opponents individually, becomes a significant hindrance when fighting two or more opponents at once. With only 10 rounds per magazine, the player needs to make every bullet count.

At mid to long-range, the very high recoil of the VSS Vintorez will cause most bullets to fire heavily off-target. In order to ensure maximum accuracy, the player should switch to the semi-automatic firing mode. When doing this, the player should always remember to aim for the heads of opponents, as the VSS Vintorez is incapable of achieving single-shot kills when hitting the torsos (or other body parts) of opponents.

Firing in the fully-automatic mode will greatly increase the deterioration of the VSS Vintorez. It is recommended that the player Unbreak the weapon before using it regularly. If the player only plans to use the weapon occasionally, then they should primarily use the single-fire firing mode.

Compared to the SVU-AS, the VSS Vintorez is generally better, primarily due to the fact that it possesses much higher ammunition reserves, but also due to several other factors, such as its faster fire-rate.

The MK14 EBR CQB is very similar to the H&K 417D, though it is generally worse because it doesn't have access to Weapon Customization or a W-Task (though it does come with default weapon modifications). Overall, the VSS Vintorez is better than the MK14 EBR CQB.

The AN-94 has a worse effective distance than the VSS Vintorez, isn't able to be silenced, and cannot equip a scope. However, when used by highly-skilled players, the AN-94 can become a deadly weapon at any range, potentially even more deadly than both the VSS Vintorez and the H&K 417D. This is due to the AN-94's special double-fire firing mechanic. Overall, the VSS Vintorez is probably a friendlier weapon for novice players than the AN-94.

The W-task for the VSS Vintorez is 130 longshots. Finishing it will unlock the PSO scope, giving the VSS its intended true role as a long-ranged sniper.

The VSS Vintorez is customizable with optics and collimators. It cannot equip muzzle devices or tactical devices. Visit this page for more info about which mods the VSS Vintorez has. 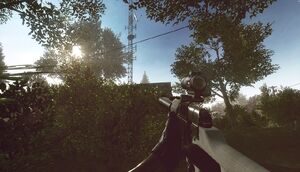 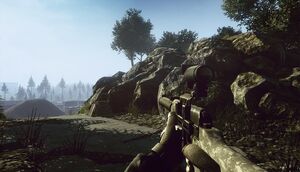 Retrieved from "https://contractwars.fandom.com/wiki/VSS_Vintorez?oldid=26984"
Community content is available under CC-BY-SA unless otherwise noted.